I like looking at veggie gardens and had good scope for doing this in the Alps. In each village, Pralognan, Grindelwald and Zernez, the paths down to the shops, cable cars or station threaded through houses and their gardens. Nearly always there was a vegetable patch, often at the front if that’s where the best sun was.

In early June it had been hot and dry in Pralognan and the gardens seemed to be slow and suffering a bit – rows of tiny forlorn lettuces, thready onions and beans only just starting to clump up. The peonies in the borders were doing well though.

About a week later in Grindlwald, the vegetables were looking much better: beans and peas were starting to climb and lettuces starting to fill out. It had been wet there for weeks. The difference was enough for me to start noticing and take photographs. 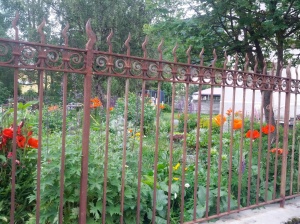 But what a surprise Zernez, on the edge of the Swiss National Park, was a week further on. The gardens were luxuriant and thriving. A patch of lettuces full and shining in the corner of a front garden,beans climbing high in a small front garden and a larger garden mixed with borders of peonies and delphiniums. 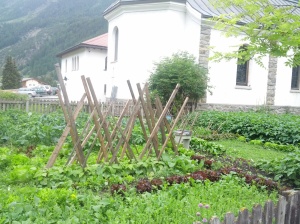 I wondered if Zernez’s gardens did better because they were on a valley floor which had better soil than the other gardens which were on sloping valley sides.

I warned you that that this was a particularly thrilling blog.