Tony Judt, in his memoir,’The Memory Chalet’, writes of his childhood holidays at Mürren in Switzerland. He describes the warmth and protectiveness of the interior of the hotel that his family stayed at for a number of years. I was intrigued by his description of a village reached only after a long and climbing train trip and which could only be reached by train and which had no cars.

I imagine that a hotel like the one above could have been his ‘memory chalet’.

The village is perched on the edge of a cliff high above a deep valley. There is a terrace where you can sit and look at the view. It is separated from the drop by a gently rusting wrought iron fence which could have been there in his time. 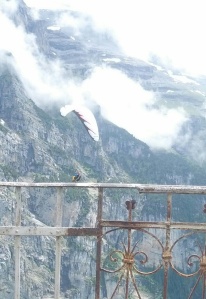 However, the hang glider would definitely not have been there. Nor the thumb which has been very persistent.